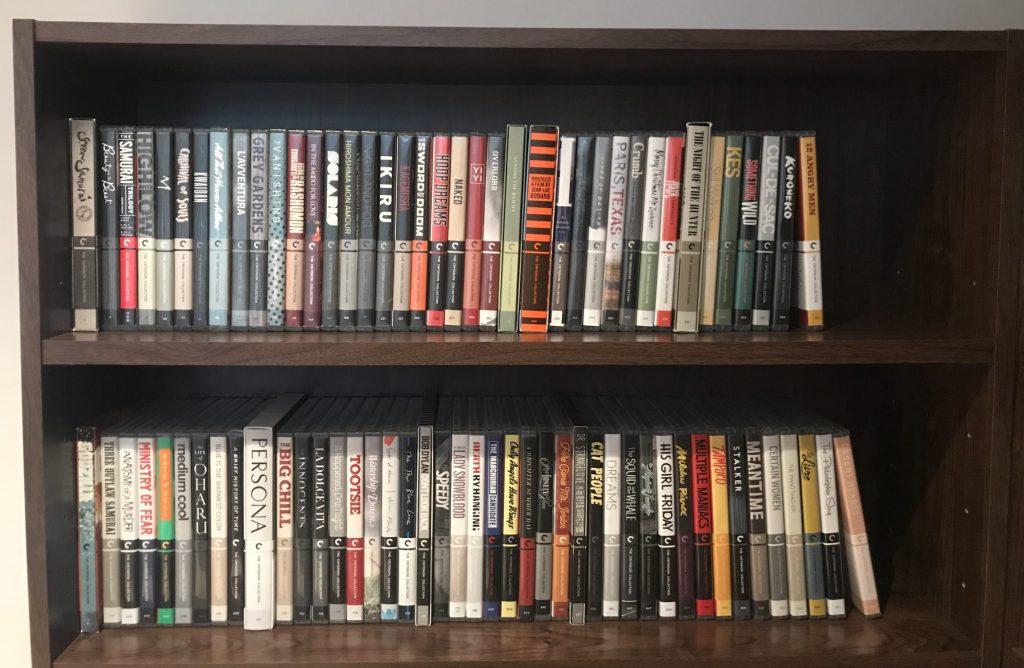 I like to buy Blu Rays, and some of my favourite ones to buy are the Criterion Collection releases, which always have interesting supplements and bonus features. I thought I’d just show you my collection so far, and focus on a few favourites. 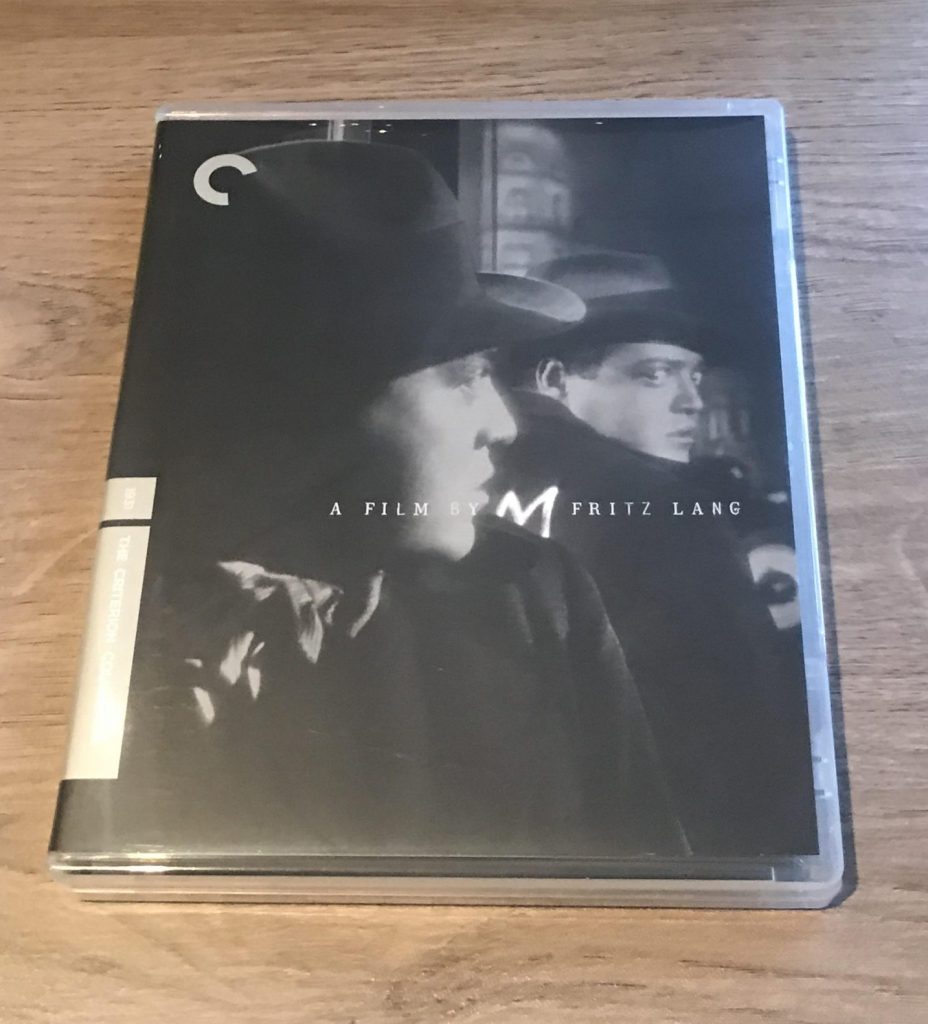 M is a 1931 thriller from Germany which follows a manhunt for a serial child murderer played by Peter Lorre. Not only do we see the police’s investigation, but we also see the criminal underworld attempting to track down and catch the serial killer. Peter Lorre’s performance as the serial killer Hans Beckert is suitably haunting and I love the use of sound in the film (the repeated whistling of “In the Hall of the Mountain King”, for example). The whole story is chilling, especially a sequence near the end of the film in which we see Beckert in front of a kangaroo court pleading that he is ill, a victim of his own compulsions. It says quite a lot about public hysteria when it comes to crimes of this nature, and makes you think about crime and punishment systems in general. Even outside of these elements, the story itself is enthralling, and it’s probably the best of the Fritz Lang films I have seen so far. 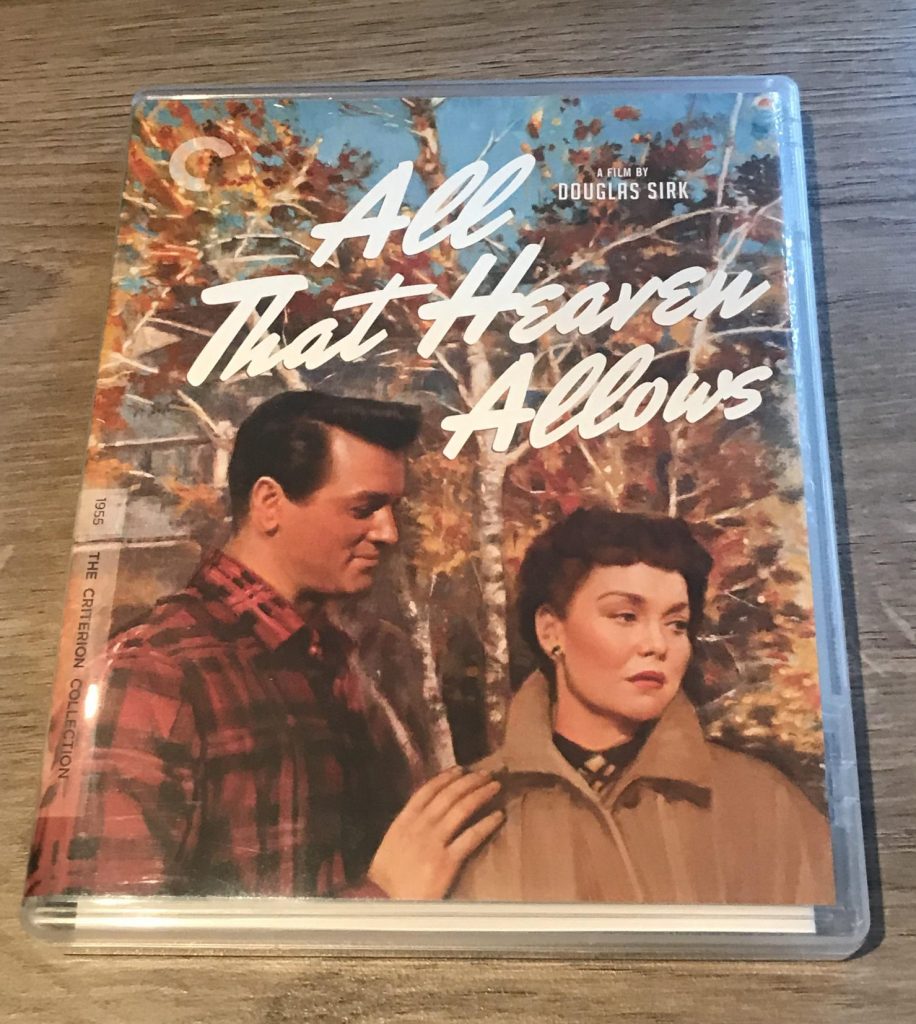 This melodrama stars Jane Wyman as a well-off widow in the suburbs of New England who takes an interest in her gardener played by Rock Hudson. The two fall in love and become engaged to the disapproval of Wyman’s grown-up children and friends. The film follows their relationship and the familial/community tensions that arise because of it. The mise-en-scene and colour in the film are particularly great, the film is shot in Technicolor too which emphasises the colour choices even further. This story was re-imagined in another great Criterion release, Ali: Fear Eats the Soul by Rainer Werner Fassbinder. 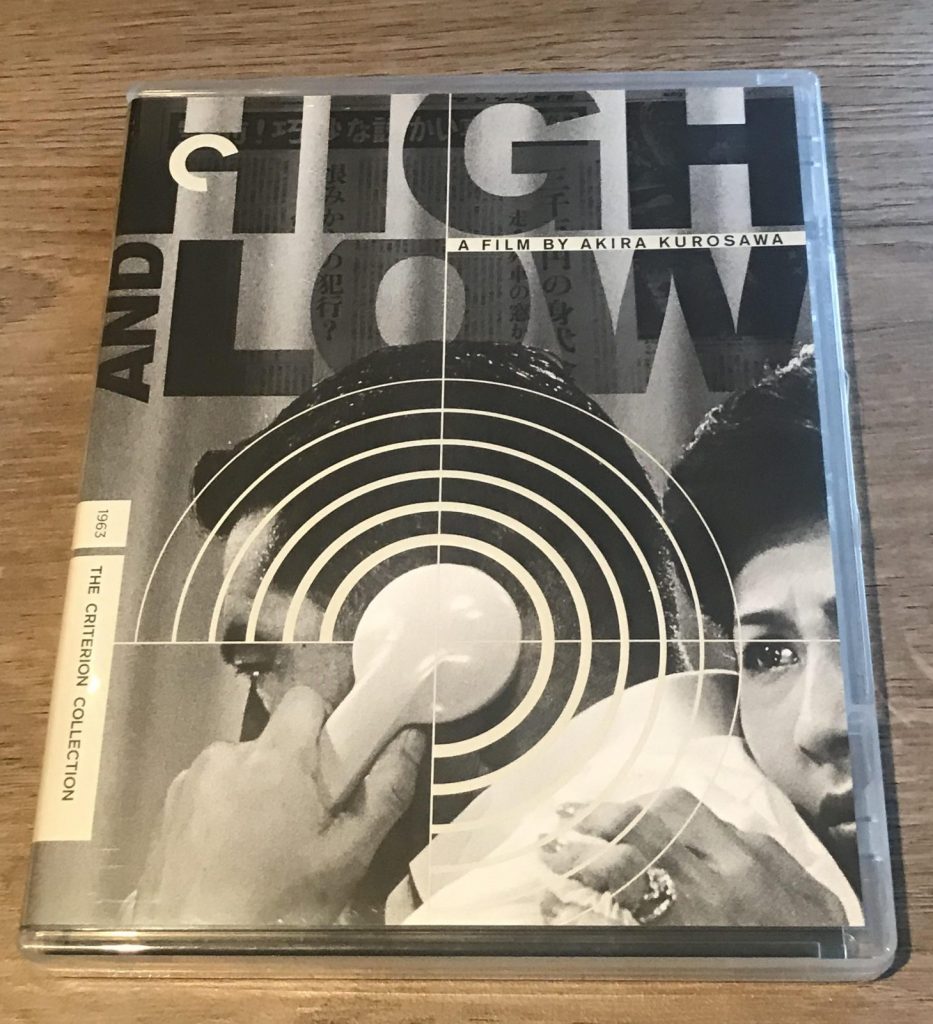 Another crime-thriller now, this time from one of my favourite directors Akira Kurosawa. The film starts with a businessman played by Toshiro Mifune who is getting funds together to plan a takeover of the business he is an executive for. He receives a phone call telling him that his son has been kidnapped and demanding a hefty ransom for his release. We soon learn that the kidnapper has abducted the wrong child, taking Mifune’s chauffeur’s son instead, but the kidnapper demands the ransom in full nonetheless. In the first half of the film we see the kidnap and retrieval of the child, then we change focus to the police investigation to apprehend the kidnapper.  It’s around 2 and a half hours long, but is paced so well that it seems to fly by.  I bought this film blind after enjoying other Kurosawa films previously and it did not disappoint. 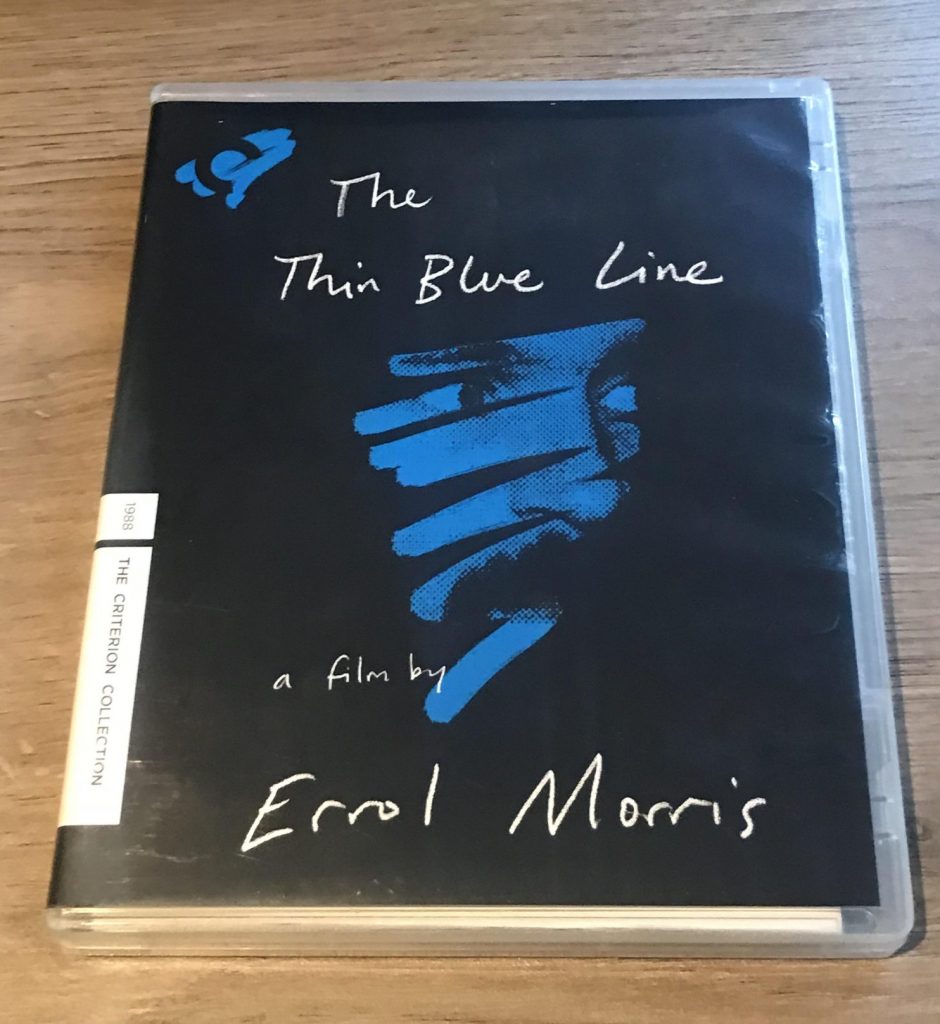 I would have to call The Thin Blue Line the best documentary I’ve ever seen, along with Hoop Dreams (another Criterion release). We see an inmate named Randall Adams at a Texas prison who has been convicted of the murder of a Dallas police officer and sentenced to death. The film delves into the case against him, featuring interviews with Adams himself as well as some of the people who worked on his defence in court, witnesses, the judge and police detectives involved in the case. We see the case doesn’t quite stack up, and it’s both intriguing and terrifying to learn of the judicial processes which caused Adams to end up where he did. The film also uses re-enactments, which would become a staple of later TV and film crime documentaries.  The Philip Glass score is also incredible. It’s a little difficult to say you love The Thin Blue Line in the UK though, since most people here will think you mean the TV comedy series starring Rowan Atkinson… 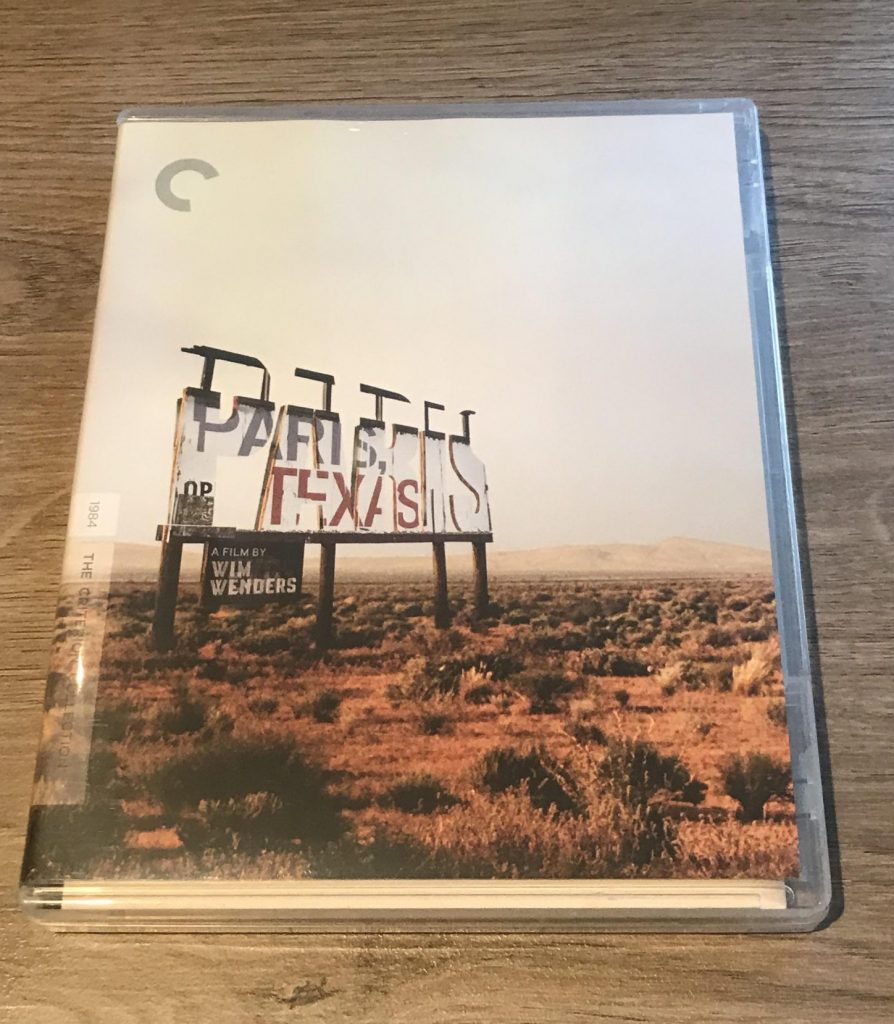 Whenever I think about Paris, Texas it’s usually one of two things: Harry Dean Stanton’s monologue near the end of the film, or how perfect Stanton’s face is for the starring role of Travis.  The film begins with Travis drifting around the Texas desert, before entering a building seeking water and then collapsing. A doctor tends to him and calls his brother Walt (played by Dean Stockwell) to come pick him up. Walt arrives from California and the two drive back there where Travis is reunited with his young son Hunter who he hasn’t seen for four years. Travis and Hunter bond, and eventually go off in search of Hunter’s mother. The film has numerous wide shots of the American landscape and looks beautiful, and we can’t help but be intrigued and captivated by the laconic Travis. Travis is a man of few words, which makes his monologue in the final stages of the film all the more powerful. Apparently this was Kurt Cobain’s favourite film, and I commend his taste.

So those are some of my favourite Criterion releases that I own. Probably not my “top 5” in terms of 5 favourite films of the collection, but certainly 5 films that I would recommend to anyone. There are so many incredible films in the collection it’s impossible to talk about them all in one post, and of course so many that I don’t yet own or have yet to watch too.