Identity and Humanity in RoboCop (Paul Verhoeven 1987): What It Means to be Human 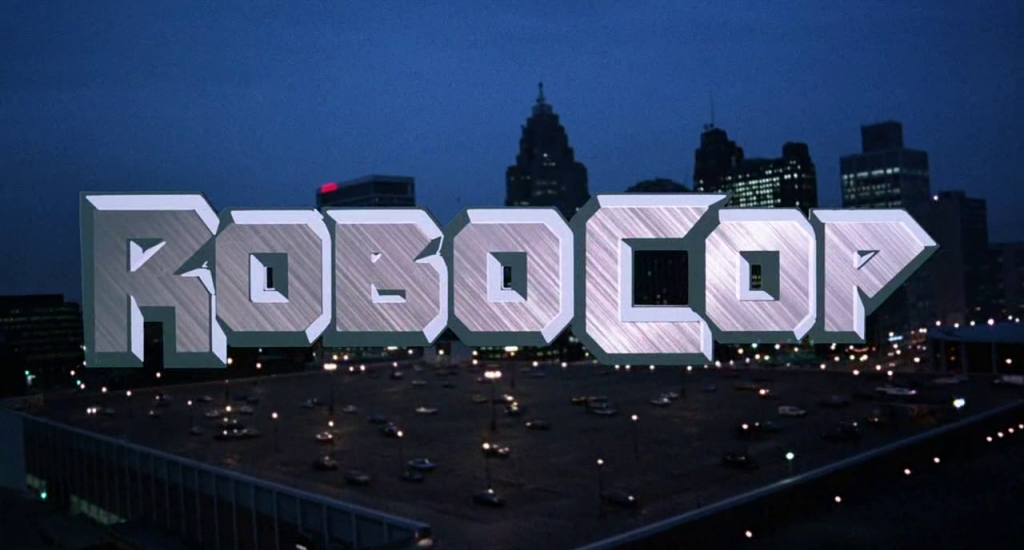 Paul Verhoeven’s 1987 action/sci-fi classic RoboCop is not just a hilarious satirical masterclass, a special-effects showcase replete with religious symbolism (RoboCop is Jesus!), or one of the best action films ever made. It absolutely is all of these things, but it’s also a study on identity and what it means to be human, and what better way to explore such a complex subject than in a film that features a shoot-out in a cocaine factory?

RoboCop explores identity and humanity by highlighting the differences and similarities between the human Murphy (Peter Weller) and cyborg RoboCop, largely through use of the camera as a first-person point of view. In the film’s beginning, we are given a feel for Murphy’s character, his relationship with partner Lewis (Nancy Allen) and some personal traits which would come back into play later. At this stage of the film, the camera views Murphy from the outside like a spectator, but this changes after he is brutally gunned down by Clarence Boddicker (Kurtwood Smith) and his gang of thugs in a warehouse and left for dead, the point in the film where Murphy starts to become RoboCop.

As Murphy’s lifeless body is wheeled through a hospital corridor we witness the pronouncement of his death through Murphy’s own POV. The tubes and harsh lights visible in the shot accompanied with the closeness of the people attempting to resuscitate Murphy create a claustrophobic and dire atmosphere. When the medical staff use the defibrillator on Murphy, we hear the jolt of electricity and cut to Murphy, eyes glazed and wide open, jolting along with it. The marriage of what we hear and what we see magnifies its impact, creating an impression that the viewer can almost feel the shock themselves. Inserted in this sequence is a shot of Murphy’s wife and son standing outside his home, waving goodbye and smiling, and the camera pulls back from them at a rapid pace signifying the death of what makes Murphy human; his memories, emotions and personality, his connection to family and humanity. The medical staff verify Murphy’s death, the screen fades to black, a moment of stillness, and then the film seems to boot up like a computer, the POV now noticeably different. There seems to be an overlay with scan-lines and green text, like a computer system. It is through this difference that the change from Murphy to RoboCop is evident. We see engineers testing his vision, hearing, and other capabilities and see these functions represented graphically on screen like with soundwaves to show what he is hearing, and a textual representation of the “program” that is being used, e.g. “Voice/Stress”. All of this serves to emphasise the now mechanical nature of our protagonist and his change from Murphy to RoboCop, but also allows the audience to feel the life in these interactions as we experience them in the same way that RoboCop would, all from his POV, which somewhat paradoxically makes him seem somewhat more alive and present for the audience compared to how Murphy was presented, rather than just the object or property that Omni Consumer Products now views him as.

The film continues in this way, with various scenes establishing RoboCop as different from the usual police officer, with shots of his robotic and unnatural way of walking and accompanying mechanical sounds of his limbs and joints moving, the shooting range scene showing the difference in his weaponry and capabilities, and a series of scenes showing RoboCop thwarting crimes in his own, somewhat impersonal style. At this stage of the film, it seems RoboCop has lost his humanity with even his voice seeming more robotic in pitch, tone and delivery. He seems not much more than a machine designed to fight crime, only stopping to recharge in a specially constructed chair and consume a nutrient paste (‘It tastes like baby food!’). Even at this stage however traces of Murphy still remain, such as the signature spin of his pistol before holstering it, in some of the phrases he uses and in his style of driving, but these seem buried deep in whatever subconscious that still remains in the brain contained within RoboCop. His old partner on the force Lewis (Nancy Allen) recognises these behaviours and comes to believe Murphy is still alive through RoboCop.

RoboCop begins to experience memories of his previous life as Murphy, including something of a nightmare replaying his death at the hands of Clarence & co, and becomes fully aware of his previous life as Murphy after an encounter at a petrol station with Emil (Paul McCrane), who was one of the thugs involved in Murphy’s murder. RoboCop’s mannerisms shock Emil into a revelation of RoboCop’s identity as Murphy. We see RoboCop react to Emil, frozen by the revelation, and feel his shock and burgeoning understanding. This is played against the replay of Emil’s exclamation through RoboCop’s memory, which plays to the audience through POV in a mechanical way with the overlay of scanlines and a “playback” caption. This mechanical and computerised way of recalling memory further emphasises how far RoboCop has come from regular humanity.

This leads RoboCop to visiting the address listed for Murphy, his old home, and this sequence definitively blurs the lines between Murphy and RoboCop through its use of POV and choice of shots to convey memory and flashback. As RoboCop walks through the now empty and for-sale house Murphy lived in with his wife and son not so long ago, there are various flashbacks, and it is how these flashbacks are presented that effects the impression the audience gets about who is remembering. What is most important is that first, RoboCop surveys the scene in the usual POV style we have come to associate with him; with overlay scanlines and green text as if on a computer screen. There is a burst of static and the scene changes to signify that this is now a memory of Murphy. The POV during the memories is devoid of the signifiers we have come to associate with RoboCop, the scanlines and green text are now gone. This is important because we have already been shown how RoboCop remembers things, he literally plays them back in his head using his operating system, but when RoboCop’s memories begin to manifest in the house this is all gone, it’s organic and much more natural than mechanical. This signifies we are seeing Murphy’s memory, and that Murphy is slowly becoming a greater part of RoboCop. If Murphy’s memories are RoboCop’s memories too, then it stands to reason that Murphy and RoboCop are one and the same.

All of this leads to a quest for justice for RoboCop, seeking to punish those who were responsible for Murphy’s death. This results in the aforementioned shoot-out in a cocaine factory where Clarence is arrested and puts RoboCop on the trail of Dick Jones (Ronny Cox), a senior executive at OCP responsible for much of the ills and crime inflicted on the people of Detroit, and in confronting Jones, RoboCop (and the audience) is served a stark reminder of his mechanical nature and the restraints that represents. When RoboCop attempts to place Jones under arrest, a hitherto classified directive in RoboCop’s programming makes itself known, stating RoboCop is unable to arrest any senior OCP staff, and attempting to violate it sends RoboCop’s systems haywire. We see this through RoboCop’s POV, the word’s “Product Violation” flashing in green text on the screen and bursts of static affecting the video feed of RoboCop’s vision as Jones explains ‘We can’t very well have our products turning against us, can we?’.  Another OCP ‘product’ ED-209 is called in to finish RoboCop off, but RoboCop manages to escape, heavily damaged, and is rescued and taken to an abandoned steel mill by Lewis to recover.

It’s at the steel mill that we first see RoboCop without his helmet, and the construction of the shot where we first see how he looks reveals multiple layers. The shot focuses on Lewis holding up a sheet of metal as a mirror for RoboCop which we can see his reflection in, and also shows the back of RoboCop’s head and part of his shoulder, slightly out of focus on the far left of the frame. So here we are seeing Lewis’s sombre but muted first impression of her old partner’s new look alongside RoboCop’s himself seeing it for the first time, as well as seeing what human elements remain of RoboCop ourselves as an audience. The distorted reflection itself helps to highlight the blurring of the lines between man and machine, and reflects the doubt and struggle RoboCop is himself having about his identity as Murphy.

RoboCop chooses to leave his helmet off for the remainder of the film, and it is in this manner that he bursts in to the OCP board-room in the final scene of the film to once again confront Dick Jones. He lays out Jones’ charges in front of OCP chairman the Old Man (Dan O’Herlihy) and explains he is unable to act against an OCP executive due to his programming. RoboCop presents his proof using the data-spike in his hand to playback a video of Jones admitting to the murder of another executive, and Jones reacts by taking the Old Man hostage at gun point and making demands. All the while, there are shots of RoboCop’s POV throughout the sequence, with “Directive 4” flashing in green text to highlight the mechanical restriction against his free will to act. Jones is fired by the Old Man and we see the green text disappear, RoboCop thanks the Old Man and, in true RoboCop fashion, riddles Jones full of holes and sends him through the high-rise window to fall to his death. The film ends with an affirmation of our protagonist’s identity, RoboCop and Murphy are one and the same.

This is why I love RoboCop. Not only for it’s glorious action set-pieces, suitably slimy and irredeemable villains, dark sense of humour or hilarious satirical elements, but also because it is, rather unbelievably, a potent and stirring philosophical study on identity and what makes us human. The film shows us Murphy, then shows us RoboCop, and finally shows us how the two are one. The fact that it explores all this us while also featuring a shoot-out in a cocaine factory, a Toxic-Waste Man, a robot falling down the stairs and about two tonnes of broken glass is just a bonus.