Kim Ji-young, Born 1982 is a film about a woman in her 30s named Ji-young (Jung Yu-mi) who has recently given birth to her first child and acts as a stay-at-home mother while her husband Jung Dae-hyun (Gong Yoo) continues working. Since the birth of their child, Ji-young has started acting strangely. From time to time, she will be seemingly taken over by another person’s spirit, such as her mother, or deceased grandmother, and speak as if she is that person rather than Ji-young, referring to herself in the third person and taking on personality quirks of whoever is “possessing” her at that time, like wanting to drink beer. Afterwards, Ji-young has no memory of it, and puts the lost time down to simply being tired following childbirth. Dae-hyun naturally is worried, thinking she may be experiencing postpartum depression, and asks her to visit a psychiatrist, although he doesn’t tell her she has been acting “possessed” from time to time. From here, the film jumps between important events of Ji-young’s past and the unfolding story of the present to flesh out Ji-young’s character, her influences, and how she came to be the woman she is today.

For me, there were basically two main ingredients to the film: the dynamics of the family (both Ji-young and Dae-hyun’s parents and siblings), and how difficult it is for an ordinary woman just to exist in such a male-dominated society. Both of these aspects worked very well, for me. The performances of all the characters are excellent, especially Ji-young and Dae-hyun, you can really feel the warmth, the worry, the love and the pressure of it all.

The focus on how society is skewed towards men is handled very deftly as well. It’s not exactly subtle, but neither is it a simple “MEN BAD” message. While some men do behave very poorly, it’s not always out of malice, but rather an insidious and instilled attitude baked into society. It can be as simple as an expectation of who will be cleaning or cooking dinner, or as serious as sexual harassment. For example, Ji-young feels pressured into being a staying at home mother and bearing the brunt of child-rearing simply because if Dae-hyun applied for paternity leave at work, it would become exponentially more difficult to be promoted after he returned. This, combined with women’s earning power being less than men’s anyway, essentially traps Ji-young into the role of stay-at-home mother. It’s not Dae-hyun’s fault that society is structured this way, but even so he’s not perfect either. Individually, a person may be caring and supportive, but it’s a good deal harder to free yourself from the constraints placed on you by society, and unlearn prejudices widely propagated and endlessly perpetuated by that society. Of course, the film is focused on South Korea, but this type of attitude and male-skewed society is prevalent the world over.

The feeling I got watching this film wasn’t that I was being chided for participating in society as it is, but rather the importance of opening your eyes to what’s going on in the world. It doesn’t explicitly tell you that you yourself need to change (whether you’re a man who is profiting from how society is structured or you’re helping keep these kinds of attitudes alive, be you man or woman), but rather shines a light on the types of attitudes and practices that do need to change, on a societal level. It gives you an idea of the depth and breadth of issues women may face, simply for existing. Through this, hopefully you would come away from the film feeling outraged, or enlightened, or motivated to change things on your own. And hopeful that things can change. Maybe some combination of all of that.

I’ll probably think about this film quite often, and I do hope I can help contribute to a fairer society, in whatever way I can. 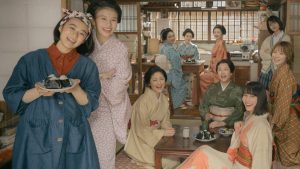