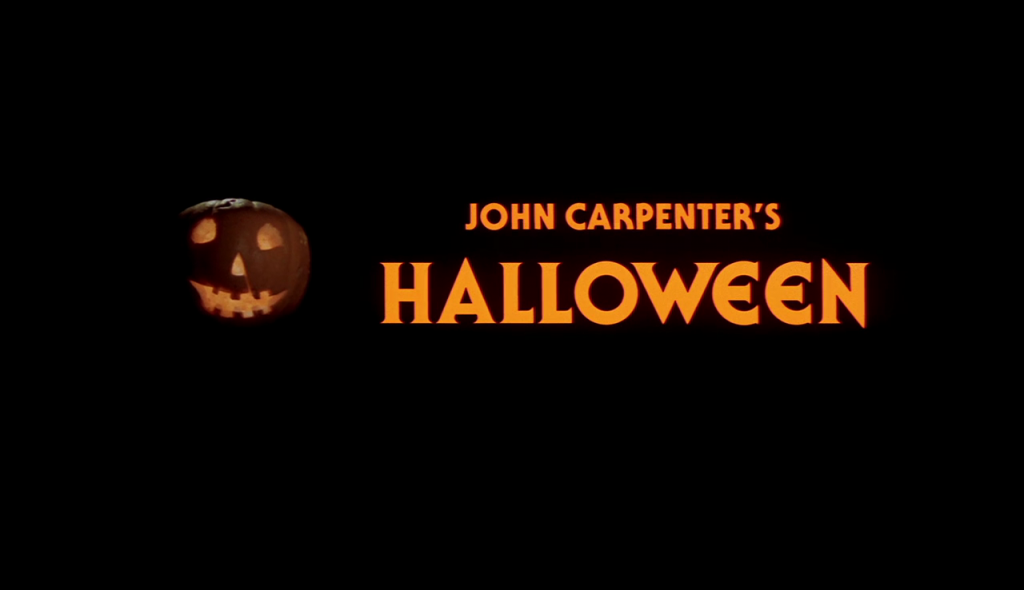 I know that this is probably 5 months too early, but it doesn’t have to be Halloween for you to enjoy Halloween… John Carpenter’s 1978 horror classic’s incredible box office takings (it made about 200 times its budget) supercharged the popularity and prevalence of the slasher genre in the years to follow, spawning many sequels, rivals (notably the Friday the 13th and Nightmare on Elm Street series) and imitators. There’s some quality, charm and value in what was to follow, but really none of it held a candle to Halloween. What I love most about Halloween, and the main reason I’d place it above its rivals is how effectively it builds tension, using camera, lighting, sound and music cues to create a sense of dread and menace for its silent antagonist Michael Myers. Michael doesn’t have to speak for the audience to realise how dangerous he is, the film is constructed in a way that consistently portrays him as an intimidating figure. The film isn’t particularly excessive or gratuitous in its depiction of violence, really it’s all in the build up.

The film opens in Haddonfield, Illinois in 1963, a point of view shot outside a suburban home, we watch through the eyes of an unknown person as they look through the window of the house at a teenage girl and her boyfriend fooling around on the sofa. We watch as they retire upstairs, and the camera slowly and deliberately moves into the house following this mysterious person’s point of view. We get to the stairs and see the boyfriend exit the house, and the mystery person goes upstairs to the girl’s room, putting on a clown mask he finds on the floor. He enters the room, we see the girl recognises him as “Michael” and then the mystery person stabs her to death. The camera then quickly moves back downstairs and out into the street where a car has pulled up, two adults exiting the car and also recognising this mystery person as “Michael”. They remove the mask and the camera pulls out to reveal whose point of view we have been following: a young boy in a clown costume for Halloween. 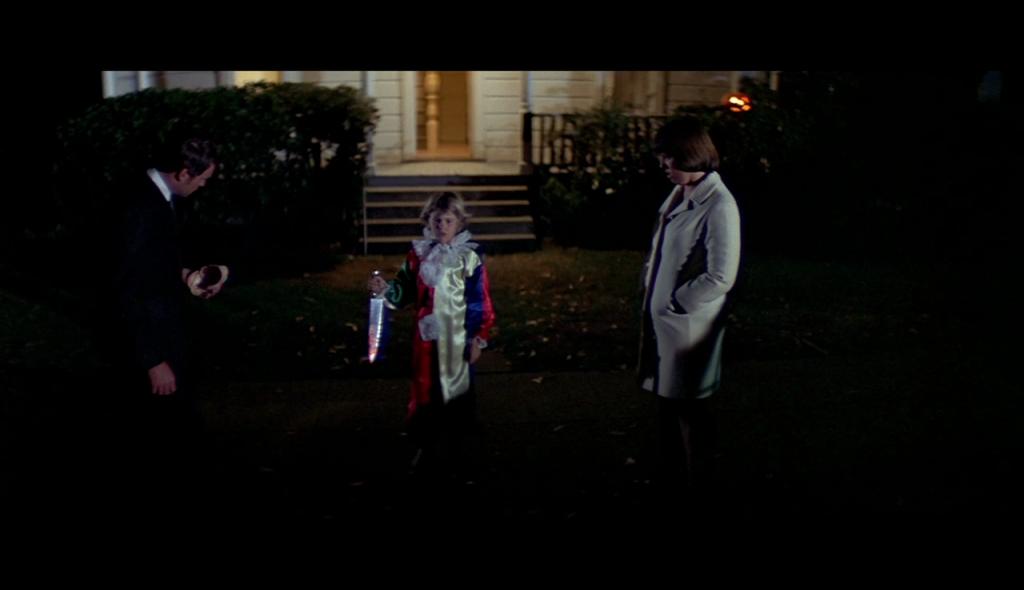 We then cut to 15 years later, and are introduced to Dr. Sam Loomis (Donald Pleasence), on his way to a maximum security mental hospital with a nurse to pick up a patient to take to a judge. We learn this patient is Michael Myers, and Dr. Loomis feels that he is not even human, more like evil incarnate. It’s a dark and rainy night, and upon arrival at the hospital some of the inmates seem to be loose in the grounds. They stop at the main gate and Loomis exits the car to investigate. An inmate manages to jump onto Loomis’ vehicle and break in, driving away into the night. Loomis knows it’s Michael Myers, who will be on his way back to Haddonfield.

Cutting back to Haddonfield, we are introduced to Laurie Strode (Jamie Lee Curtis), a bookish and innocent high school student whose father is a realtor. On her way to school, her father asks her to leave a key at the old Myers house, where the murder took place 15 years ago, which he is trying to sell. When Laurie approaches the house, the camera switches to a view inside the house, looking out onto the porch at Laurie, and we hear heavy breathing. Michael steps slightly in to shot accompanied by an ominous musical sting, his face obscured by the dark, and creates a sense of dread regarding his intentions. 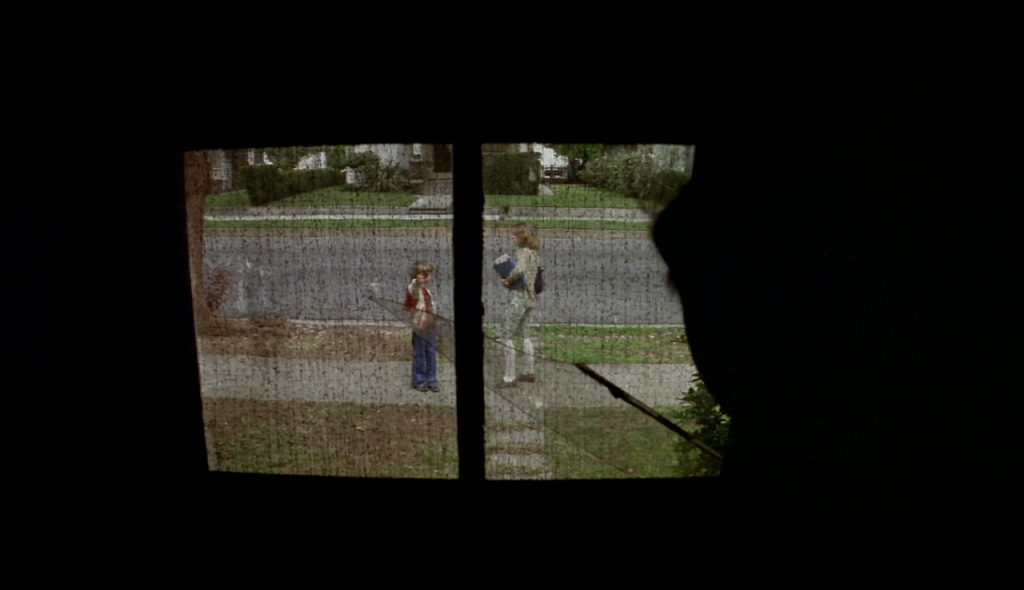 The film continues in this vein for the next 20 minutes or so, following Laurie as she goes about her day at school and walking home with friends, talking about their plans to babysit in the evening. The camera often watches from afar, and sometimes feels as though it’s stalking the other characters. Michael is seen to be following them in his stolen car, and Laurie catches glimpses of him through the day (accompanied by musical stings, and sometimes a portion of Michael’s trademark theme). Laurie will see Michael, look away, then when she looks back to see if anyone is still there sees no one.

In these types of shots Michael appears as a small or obscured figure in the frame, primarily identifiable by his mask.  That Michael is often seen from a distance, inactive and unmoving, gives an impression of a menacing figure and creates a sense of tension and foreboding, but the distance makes the danger seem less immediate and instead makes us tense about possible dangers to come. As well as following Laurie’s day and Michael’s stalking, we see Dr. Loomis rushing to Haddonfield where he is certain Michael will return to commit further atrocities, and his attempts to alert local law enforcement to the danger. Loomis helps to add to the sense of danger around Michael, regarding Michael as a remorseless, evil “it” and more devil than human. This build-up by Loomis makes Michael’s stalking seem even more menacing, and helps to ensure the audience does not look for human qualities in Michael to empathise with casting him firmly in the role of the monster.

At dusk we watch as Laurie and her friend Annie (Nancy Kyes) drive together to their babysitting jobs, Laurie looking after a small boy named Tommy, and Annie looking after a girl named Lindsey across the street. On the drive over, it is dusk and we can see Michael following the girls in his stolen car. By the time they arrive at the houses they will be babysitting at it’s completely dark, and the girls haven’t noticed Michael following and watching. A little later, Annie’s boyfriend calls and tells her he is now free for the night, so Annie takes Lindsey over to Tommy’s house to sleepover there and be looked after by Laurie. She gets into her car to go pick up her boyfriend and is murdered by Michael who was hiding in the backseat. Tommy had seen Michael outside of Lindsey’s house and told Laurie the “boogeyman” was outside, but he had disappeared from sight by the time Laurie looked outside and is dismissed as being part of Tommy’s imagination.

Not long after this has happened, Lynda (P.J. Soles), another friend of Annie and Laurie’s, and her boyfriend arrive at Lindsey’s house. Finding the house dark and empty, and thinking they have the place to themselves, they head upstairs to fool around. Afterwards, Lynda’s boyfriend goes downstairs for some beer and is stabbed and killed by Michael. Michael heads upstairs wearing a sheet and Lynda’s boyfriend’s glasses, standing silently and still in the doorway. Lynda thinks it’s her boyfriend and reacts flirtatiously, but when Michael just continues to stand silently she gets bored and calls Laurie. Laurie answers and hears as Michael is strangling Lynda with the phone cord, but thinks it’s just Lynda playing a prank and hangs up. Having not heard anything from Annie, and after this strange call from Lynda, Laurie is a little suspicious and decides to go over to Lindsey’s house to investigate. There she discovers Annie’s corpse displayed on bed upstairs along with Judith Myers’ headstone, whom Michael had murdered 15 years previously. In the same room she finds the bodies of Lynda and her boyfriend, and screams in terror. Michael emerges from the shadows and slashes at Laurie, but she manages to escape the house and runs back across the street to the children.

Michael follows and attempts to kill Laurie again, who struggles with him and manages to stab him with his own knife. But Michael rises and follows again, and once more Laurie gets the best of Michael and manages to stab him in the eye with a wire hanger. Thinking that Michael has been killed, Laurie goes to the children, but Michael rises once more and goes after Laurie. The children flee and look for help, Dr. Loomis sees them run from the house and enters, goes upstairs and shoots Michael six times, knocking him out of a second story window. When Laurie and Loomis look outside, the body has disappeared. The film ends with shots of all the places in Haddonfield Michael has visited in his reign of terror, accompanied with the sound of Michael’s heavy breathing, and ends on a shot of the Myers’ household…

Anyone watching this film for the first time today will probably find it cliched, but many of the horror tropes in Halloween like the promiscuous teens being killed off, the silent masked killer and the Final Girl trope became popular largely due to Halloween’s immense success. Disregarding the tropes, there’s still a lot, even now, that separates Halloween from its imitators and successors. I think there’s a lot of value in thinking about how they portray Michael; where he appears in the frame, how often we see him, how he’s lit and music/sound that accompanies him. All in all, I can’t get tired of watching this film, regardless of how tired some of the tropes it uses has now become. Plus, the theme song is fucking great!