The Best Films I’ve Ever Seen: Whisper of the Heart 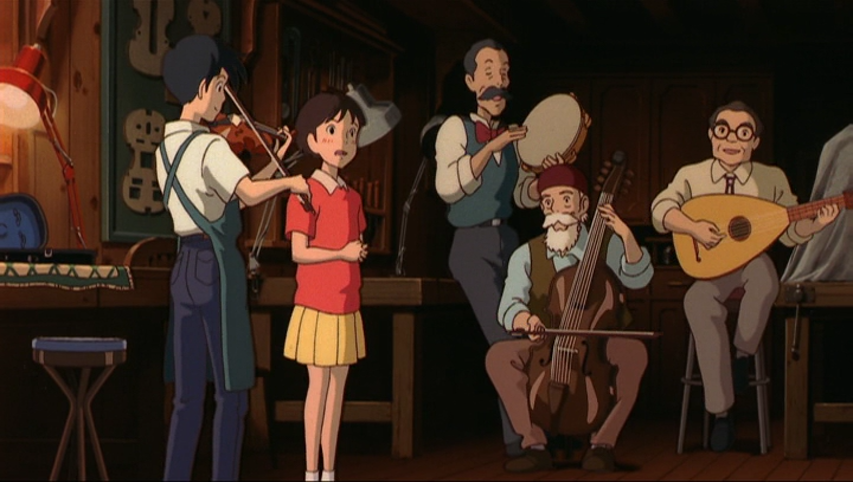 Whisper of the Heart (Yoshifumi Kondo, 1995)

After the violent and grim nature of the past two entries(Unforgiven and Halloween), I felt it was time for something a little more optimistic and heartfelt. For that, I turn to Studio Ghibli, and their 1995 film Whisper of the Heart. When people talk about the best of Studio Ghibli, they’ll usually refer to Hayao Miyazaki, Isao Takahata and the likes of Spirited Away, Grave of the Fireflies, My Neighbour Totoro and Princess Mononoke, which are all incredible films, but for me Yoshifumi Kondo’s Whisper of the Heart stands right up there with them all. Eschewing the fantasy settings and elements of a typical Miyazaki Ghibli film and instead following a teenage girl in contemporary Tokyo, Whisper of the Heart is a film about passion, art, inspiration, creativity and love, and the difficulties that can be faced in following your dreams.

The film follows a 14 year old girl named Shizuku, and begins with a look into her school and homelife. Shizuku seems bookish and creative, checking books out of the library at school and sharing lyrics she has rewritten for the song “Country Roads” with her friend Yuko. We see that her parents are both incredibly busy with work and studies, and Shizuku is largely left to her own devices, spending much of her time reading books in her room. When looking at the checkout cards in the books she has borrowed from the library, she notices the same name appearing on them all: Seiji Amasawa, and wonders what kind of person he might be (I imagine checkout cards don’t exist anymore and they just use computers now, but they used to have a card in each library book  into which they wrote the name of each person who borrowed it, and date). I love this as a narrative device, it’s really simple and lends itself well to romantic daydreaming. If someone is checking out all the same books as you, it’s likely they share your interests and you would imagine you’d get along well with them. Naturally, since Shizuku is a lover of romance and fairy tales, she lets her imagination run free. We also see as Shizuku meets a male fellow student, not knowing his name but finding his demeanour and attitude irritating, after he finds and reads her rewritten lyrics including a joke version “Country Roads” changed to “Concrete Roads”.

Later, when delivering lunch to her father at the library where he works, Shizuku notices a cat on the train with her. It gets off at the same stop she does, so she decides to follow it, and ends up at an antique shop. She is drawn to a statue of a cat that the owner of the shop, Nishi, tells her is named Baron Humbert von Gikkingen. The Baron is part of a pair of statues, and Nishi tells Shizuku he has been looking for its partner for many years. He also shows Shizuku an old clock he has just finished repairing and tells her the romantic story behind it. Realising the time and that she’s late delivering her father’s lunch, Shizuku runs from the shop to the library and as she nears the entrance she hears someone call her name. It’s the irritating schoolmate from earlier, who has arrived on his bike with the lunch she had left at the antique shop in her rush to the library. It’s establish Nishi is his grandfather, and he insults Shizuku as he gives her the lunchbag, and she notices the cat from before on the back of his bike as he rides away.

The film continues to follow Shizuku’s daily life, mainly at school, where we see her talk with her friend about crushes and the lyrics she is writing, until she again visits the antique shop, finding it closed but with the cat from before sitting outside. Her irritating schoolmate shows up again and lets her into the shop to look at the statue of the Baron, before she goes downstairs to find him working on making a violin. She discovers his ambition to become a violin maker, and his plans to move to a village in Italy where he can be taught the art from the masters. She asks him to play something on the violin for her, and he plays “Country Roads”. Shizuku sings along with her rewritten lyrics and Nishi arrives with his friends to accompany them on their own instruments. After their joyous rendition of the song ends, Shizuku learns that her annoying schoolmate is none other than Seiji Amasawa, the boy who had been borrowing all the same books as her from the library.  She reacts angrily at first, feeling her romantic daydreams about Seiji were completely ruined, but calms down and the two become close as the days pass, spending more time together.

On the rooftop at school, Seiji tells Shizuku that he will be going to Cremona, Italy for two months to study violin making on a trial basis to see if the masters there think he is capable, and it’s at this point that Shizuku chooses to dedicate herself to following her own dreams, inspired in part by Seiji’s determination to test himself, and resolves to write a story in the two months Seiji is away, to test her own capabilities. She visits Nishi in his shop to ask permission to use the Baron as a character in her story, who agrees on the condition that he is the first to read her finished story.  She expresses doubt about her talent and ability to write a good story, and Nishi laughs, telling her she sounds like any other artist. He gives her a geode, tells her there are emeralds within but they must be looked for, refined and polished, much like it is hard work for creative types to look inward and find the gems within, and polish them to their highest standard.

Shizuku works hard on her story for the next two months, letting her schoolwork deteriorate in pursuit of her goal. Finally she is finished and rushes to Nishi’s shop to have him read the story. It’s fairly long, so Shizuku waits outside while Nishi reads it, and when he comes to tell her he has finished she breaks down crying, fearing she isn’t good enough and comparing herself unfavourably to Seiji who seems much more advanced in achieving his goals. Nishi tells her that he enjoyed the story, that it’s a little raw and needs polishing, but that it is a good first draft. He invites her inside for noodles, and tells her that Seiji was even more upset than she was when he finished his first violin.  Nishi then tells her the full story behind the statue of the Baron. He was in Germany as a youth, where he found his first love, a woman name Louise. The two frequented a cafe there which had the statue of the Baron, but the owner wouldn’t sell him as he was part of a pair, and its partner was being repaired. Eventually, Nishi managed to buy the Baron with the promise that Louise would buy its partner after it was repaired, and the two would be reunited when Nishi returned to Germany. Unfortunately, shortly after Nishi returned to Japan, World War II began and he could not return until much later. He was unable to find Louise or the Baron’s partner, and though he has been looking ever since, was unable to be reunited with either.  The stories in Whisper of the Heart are generally romantic in nature, like fairy tales, and work well in showing how and where creative people can get some of their inspiration. Nishi’s real life story ties in to Shizuku’s own work, and also marries well with her romantic daydreaming and general love of fairy tales.

The film finishes with Seiji’s return, where he has decided to first finish high school before pursuing his violin making in Italy.  Shizuku makes a similar decision to focus on her studies in order to learn more about writing, and the two continue their relationship. Seiji professes his love for Shizuku as the film ends, and talks about marriage in the future, to which she happily agrees. The abrupt and somewhat corny ending has its critics, but I feel it fits well with Seiji’s character. As Shizuku says herself in response, he’s “a violin maker, not a writer”. Its simplicity and optimism also works in its depiction of young love, free of complication and cynicism, simply hopeful and pure.

My love for this film comes from its relatable depiction of the creative process. The hard work, the self-doubt, the joy in finally making something even if it still needs refinement. In showing us what inspires and drives its characters, it gives its audience inspiration as well. Young love is ripe and well trodden ground for stories and cinema, but Whisper of the Heart’s love letter to creativity and pure, motivated characters sets it apart. If it’s not my favourite Studio Ghibli film, it’s certainly at least in contention. Tragically, this was Yoshifumi Kondo’s only feature film as director after death by aneurysm at the age of 47. While we can only dream of what might have been, I am eternally thankful for the joy of Whisper of the Heart.