Harvey: Comedy Through Anticipation and Pay-Off 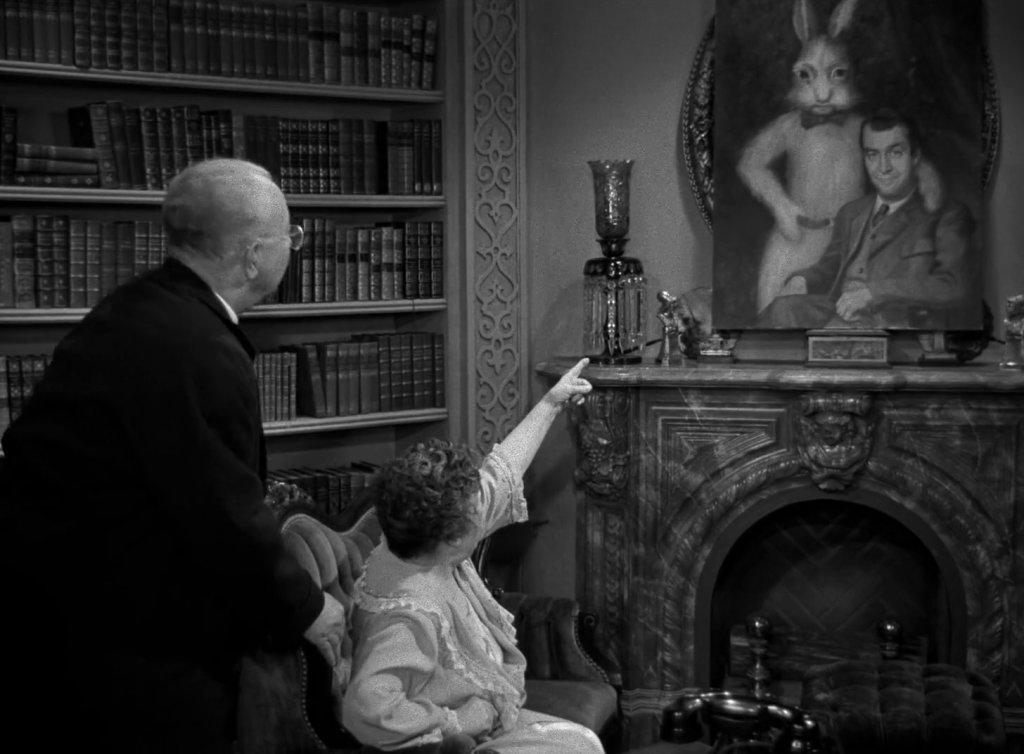 I was re-watching Harvey (Henry Koster, 1950) recently, a film starring James Stewart as a pleasant middle-aged man whose best friend happens to be an imaginary rabbit named Harvey. The film is very funny, with great performances especially from James Stewart as Elwood P. Dowd, and Josephine Hull as his exasperated and image-conscious sister Veta. There is one scene in particular that struck me as particularly well crafted in terms of how it builds and delivers its punchline, and I wanted to talk about it now.

A little background before I post the clip and start digging into it: By this point in the film, Veta has attempted to have Elwood committed to the local sanatorium, but through a series of mix-ups and misunderstandings, Elwood was let go and returned home, whilst Veta ended up briefly committed herself, but is sent home after everything is cleared up. Elwood then returns home with an oil painting of himself and Harvey, and places it on the mantelpiece in a study-room, covering a portrait of he and Veta’s mother, and leaves the house again unnoticed. Dr. Chumley, the head of the sanatorium, arrives to speak with Veta and try and smooth things over, as Veta wishes to sue the sanatorium for what happened to her. They enter the study-room to continue talking, and… :

Everything here is set up perfectly in anticipation of the punch-line. The camera follows the two as they enter the room and settles in a medium-long shot, framing Veta and Dr. Chumley in the foreground, focused on each other, with the portrait of Elwood and Harvey looming high and prominent in the background, looking outwards towards Veta, Dr. Chumley, and us, the audience.

Just after the pair enter the room, the phone rings. Veta answers and is thus distracted from seeing the painting until the crucial moment, but Dr. Chumley notices, performing a very obvious and clear double-take upon seeing the painting. This is where the joke begins to build, on a foundation of farce and misunderstanding. Veta is none-the-wiser as to what is actually on her mantelpiece, still believing it’s the old portrait of her mother rather than Elwood and a giant rabbit. It’s the anticipation of her finally realising what’s actually there that heightens the comedic tension, as her responses to Dr. Chumley’s questions seem more and more ridiculous.

There is no editing or camera movement or anything so dramatic used to build this anticipation, the shot stays static for around a minute or so. It’s all built through premise, tension and the quality of the actor’s performances and reactions to each other. Dr. Chumley’s incredulous reactions to Veta’s oblivious explanations of the subject and meaning of the painting are perfect, and Veta’s haughty and exasperated demeanour, replying to Dr. Chumley’s remarks as if they are petulant and ill-informed, just compounds the misunderstanding and adds to the comedic build-up. The pretentious description of being able to tell the merits of real art particularly heightens the farcical nature of the whole thing (and the mistaken assumption by Dr. Chumley that Veta thinks her mother is a rabbit does this as well, of course).

And then, finally, Veta turns and sees what is really above the mantelpiece. She lets out a glorious, nonsensical grunting howl before collapsing onto a nearby chair, aided by a bemused Dr. Chumley, who asks her “What’s the matter?”.  It’s taken us over a minute to get to this point, the anticipation and tension building all the while, before being comedically shattered by that magnificent punch-line, amplified by the exaggerated point and slow delivery of Veta:

“Doctor! That is not my mother!”

If you haven’t seen this film in its entirety, I urge you to seek it out. It really is a great, farce-filled way to spend 105 minutes.