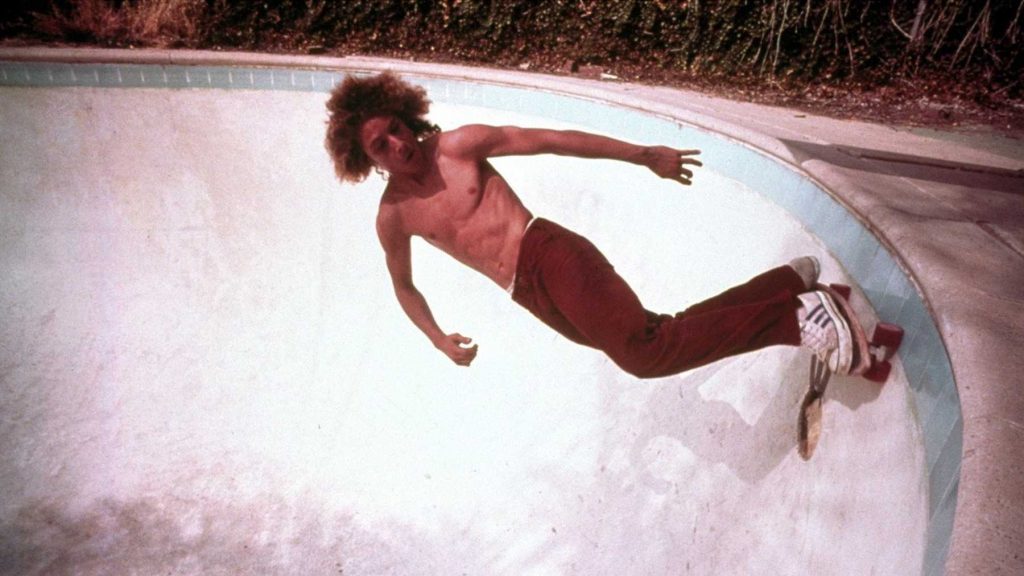 For me, Dogtown and Z-Boys mostly came off like exclusionary arseholes reminiscing about when they were part of the in-crowd. I guess it makes sense that these guys were in their hey-day before punk, and that skating seems a much more interesting sub-culture to me post-punk-boom, in the 80s and 90s. I love punk, the idea of it, you don’t have to dress a certain way or act a certain way, or even have any talent to be part of it. It’s an ethos, you do it yourself, you do what moves you and what grabs you, it doesn’t matter that it doesn’t fit in with what everyone else is saying, it doesn’t even matter if other punks tell you it’s shit, and it certainly doesn’t matter if it just sucks full stop.

Before I watched this film, skating seemed like an extension of that: outside of the norm, doing your own shit, if you screw up and fall off you just get up and go again. The Z-Boys are not like this at all. If you show up to skate, they’ll chase you off if you aren’t in their pre-approved crowd, or if you aren’t stylish enough. They’re like some jock clique in an American high school film. There is an element of punk, a lawlessness and freedom and DIY ethos in some of their actions, like trespassing and draining pools to create make-shift skateparks. Mostly though they just came off like pricks to me, who only cared about style, with massively inflated egos. I guess all this talk about punk is just a long-winded way for me to say I didn’t take to these guys at all, but it wasn’t out of a lack of interest in the subject-matter.

For me, the dumbest thing someone said was poo-pooing Michael Jordan’s impact on basketball compared to these guys’ impact on skating, and the most off-putting story was of the dying rich kid skate-fan who asked his dad to drain their pool so the Z-Boys could skate there. The guys looked back on this fondly, talking about how great it was to have a hassle-free empty pool to skate in (which, obviously, excluded basically everyone else), but no one mentioned or seemed to give two shits about the dying kid who made it happen. Maybe they edited those sentiments out, maybe they just didn’t care.

Speaking of editing, it was awful. Hyper-active and incredibly kinetic, I guess it fits with the tone of the film and its participants. Style over substance once more. I’ve seen some praise for the editing, but it did not work for me at all. Also, Dogtown and Z-Boys’ narrator Sean Penn sounded bored out of his mind, which really stuck out when contrasted with the frenetic editing style, and the film felt far too long (even though it was only 90 minutes).

I’ve never been able to skate, so I’m sure I’d be kicked out of these guys’ company double-quick anyway, but the 90 minutes I spent with them was already far too long.

(maybe I’m totally off with this, and have picked up these guys all wrong. If you disagree with me and can tell me why, I would love to hear it!)