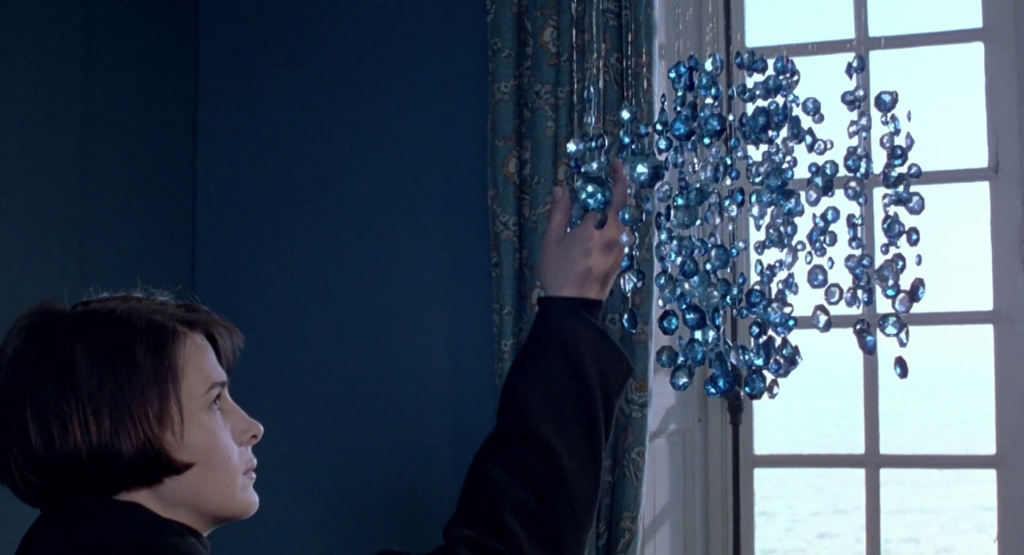 Film of the Month is a new series where, once a month, I revisit a film write something short but sweet about it, hoping to tempt others into experiencing it as well. It’ll be largely spoiler-free, but not completely, though I’ll avoid revealing any endings or major plot-twists, of course. No deep-dives or analysis with a fine-tooth comb, merely a simple recommendatory review. It could be an all-time favourite, or just one I particularly enjoyed. Really it’s just an excuse to watch some great films again, and think a little more about them.

In 1993, Polish director Krzysztof Kieślowski released the first film in his Three Colours Trilogy, Three Colours: Blue. The trilogy means to explore the French Revolutionary ideals of liberty, equality and fraternity (liberté, égalité, fraternité), and Blue deals with the first of those three: liberty.

It does this through the story of a young woman, Julie (Juliette Binoche). Stricken with grief following the deaths of her husband and daughter in a car accident, she resolves to sever all the ties that bind her to her old life, to retreat from humanity and liberate herself from the troubles and pre-occupations of every day human life. She leaves her family home for an apartment in the city telling no one its location, and she destroys her late composer husband’s final unfinished work: Song for the Unification of Europe. However, she finds that disconnecting completely from humanity is an impossibility, with ex-lovers and new neighbours finding their way into her life, and her isolation does little to assuage her grief in any case.

This film is like magic to me. It exposes Julie’s innermost soul, makes the audience clearly feel and experience something usually profoundly intangible and internal: another person’s grief. It’s exquisitely crafted, tactile and incredibly artful. Its use of music is perhaps the best in cinema, for me. It demonstrates the magnetic power of other people, the need for companionship that cannot be quelled.

One particular scene in Three Colours: Blue encapsulates this for me. A few months after relocating to her new apartment, Julie is found by ex-lover Olivier (Benoît Régent) in a nearby cafe. Olivier has been searching for Julie since she disappeared, clearly looking to bring her back into his world. Outside, a musician plays a tune on a recorder that sounds like Julie’s late husband’s work. Both remark on this: Olivier looks enthused, Julie despondent. Olivier leaves Julie alone in the cafe, remarking he is glad to have seen her and hopeful that things can develop further in future. Julie takes a sugar cube and moves to put it in her coffee. There is a cut to a close-up as Julie holds the sugar cube above the coffee, one of the corners barely touching the surface. The coffee eagerly absorbs into the sugar cube, and we quickly see it change from white to brown before Julie drops it in completely.

The way the sugar cube absorbs the coffee so readily, with only the slighest proximity to the liquid necessary, seems a perfect metaphor for the human need for companionship, to exist with others. We can put all of our efforts into denying others, into isolation, but others will always be drawn to us, and once we begin to let them in their warmth and presence floods into our very souls.

Three Colours: Blue is a film I am sure I’ll come back to in great depth in future, it’s just so incredibly rich in style and meaning. For me, this is film as art: emotional, technical and pure.