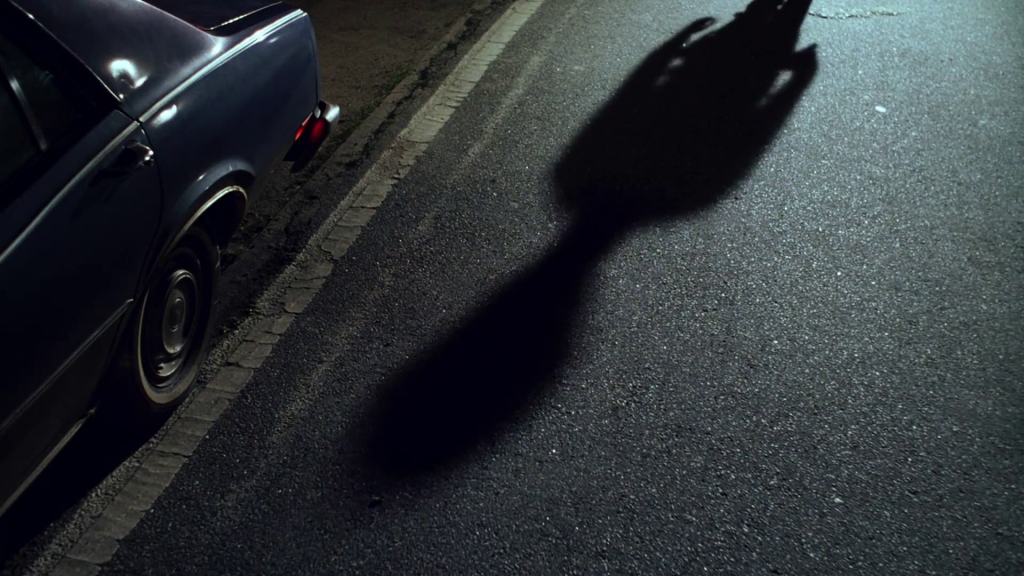 Film of the Month is a series where, once a month, I revisit a film write something short but sweet about it, hoping to tempt others into experiencing it as well. It’ll be largely spoiler-free, but not completely, though I’ll avoid revealing any endings or major plot-twists, of course. No deep-dives or analysis with a fine-tooth comb, merely a simple recommendatory review. It could be an all-time favourite, or just one I particularly enjoyed. Really it’s just an excuse to watch some great films again, and think a little more about them. This month’s entry is: The Thin Blue Line.

In the 1980s, documentary film-maker Errol Morris was conducting research for a project about psychiatrist Dr. James Grigson, a man who was often called to give psychiatrist evidence in criminal trials who would almost always declare the defendant likely to re-offend, leading to him being involved in more than 100 trials that delivered a death sentence (and earning him the name Doctor Death). In the course of this research, Morris interviewed some of the inmates who found themselves on Death Row partly thanks to Grigson, and found a man named Randall Adams who maintained that he was completely innocent of the crime he had been convicted of: the murder of a Dallas police officer. Morris himself was sceptical of Adams’ guilt, and chose to abandon Grigson in favour of exploring Adams’ story further. This would result in The Thin Blue Line, an expressionistic and noir-inflected exploration of truth and the American justice system.

Morris traces Adams’ path through the American justice system from the night of the murder to Adams’ arrest and trial. Through interviews with police detectives, defence attorneys and witnesses involved in the case, Morris lays bare the shaky foundations the guilty verdict was built upon. The two figures most central to the film’s narrative are Adams himself, who was of course convicted of the crime, and David Harris, who the film positions as the true perpetrator. Adams car had broken down one night, and was picked up by the teenage Harris. Adams said the two spent some time together, saw a film at a drive-in, and Harris dropped Adams off at his motel before the two parted ways. After the murder of the police officer, Harris put the blame on Adams, stating at the time of the murder the two were together, and Adams pulled the trigger. Through its interviews and reconstructions, The Thin Blue Line examines the truth of these different versions of the same night.

Repetition is at the heart of The Thin Blue Line, in Philip Glass’s score and in the film’s various reconstructions. It is not a linear journey, but circular. Moving backwards and forwards and backwards again through time and reality, from the present of the talking-head interviews to the various pasts of newspaper clippings, photographs, and police paperwork, to the expressionistic, dream-like reconstructions of the murder. The first re-enactment shown perhaps moves through these levels of reality and reconstruction more than any other: A police officer approaches a stationary car, and as he reaches the driver-side window a hand holding a pistol appears and shoots multiple times. With each gunshot there is a cut to a police forensic diagram showing the position of the resulting wound, and at the end of this re-enactment, the diagram dissolves to a black and white photograph of the slain officer’s injuries. The dramatic reconstruction of Morris’ filmed re-enactment competes with the police’s forensic reconstruction of the crime, before both give way to the photograph, a stark document of reality which highlights the real-life consequences of the events the film will be intellectually concerning itself with. There has been heinous murder, it is not something that miscarriage of justice can be called over lightly.

Scottish documentary film-maker John Grierson, a leading figure in the British documentary film movement of the early-mid 20th century, said that the purpose of documentary is “the creative treatment of actuality”. Essentially, a documentarist takes something that happened, and “treats” it so that it can be displayed in the most palatable (or perhaps) artful way for an audience. This can be through a myriad of film-making techniques, including editing, staging, reconstruction, or voiceover. This is a vigorously disputed defition of documentary, but it is one way to think of them: as creatively depicted versions of what truly happened. The Thin Blue Line seems to go the opposite way, it contains many reconstructions of the murder that is central to its narrative, but never of what it implies is the true version of events (that Harris alone perpetrated the murder). By showing only that which it purports to be untrue, The Thin Blue Line makes itself a post-Griersonian or even anti-Griersonian documentary. In The Thin Blue Line, the truth is not reconstructed, it is constructed. It is a poetic treatment of unreality, which allows actuality to rise to the surface. It seeks to achieve its documentary aims through style and meaning as opposed to a representation of actuality, creative or not. It does not seek to reconstruct reality for its audience, but instead allow its audience to tease out reality in other ways. Rather than “the creative treatment of actuality”, it is the creative treatment of illusion, and by gathering and depicting the various falsehoods, it helps its audience discard that which is false in order to get closer to the truth.

Watching this film again I was struck by just how good it looks. When you think of documentary, you may think of the handheld, fly-on-the-wall type of camerawork associated with direct cinema, of news or archive footage intercut into the narrative, or a voice-over leading you through the drama. The Thin Blue Line does not use these devices, instead seeming to lean on cinematic conventions more associated with the fiction film. The reconstructions are incredibly expressionistic, taking cues from film-noir, and the quality of the image cannot be over-stated. There’s a lot more that could be said about this film (the music, the manner of interviews, framing and much more), but I’ll leave that all aside for now. This is probably one of my favourite documentary films, and one I would urge anyone with a passing interest in either documentary or criminal justice to dig right into.