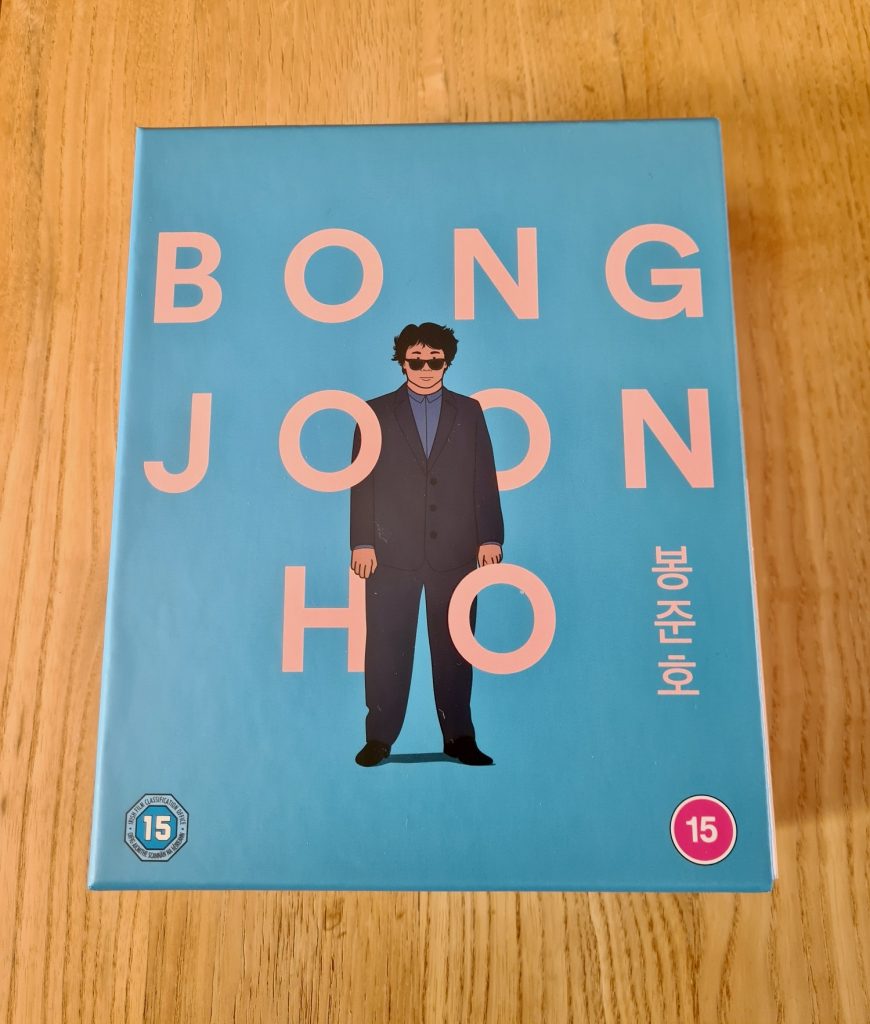 On the 19th of April 2021, Curzon Artificial Eye released the 7-disc Bong Joon Ho Collection on Blu Ray in the UK. The set contains six of the Oscar-winning South Korean director’s films: Barking Dogs Never Bite (2000), Memories of Murder (2003), The Host (2006), Mother (2009), Snowpiercer (2013), and two versions of Parasite (2019), one being the theatrically released version and the other being a black & white edition. Each film takes up a disc each, with each version of Parasite having its own disc as well. The set comes in a sturdy cardboard box/sleeve, and a selection of art cards are included. Photos below:

Barking Dogs Never Bite (2000): A part-time college professor living in an apartment block is constantly bothered by the yapping of a neighbour’s dog, and he decides to do something about it. Probably best described as darkly-comic, it’s interesting to see Bong Joon Ho getting to grips with his visual style, with a scene of a janitor telling a spooky story about a boiler-technician being particularly effective. Definitely worth a watch.

Memories of Murder (2003): After a series of rapes and murders in a rural, small South Korean town, a task force is set up to catch the culprit, and the inexperienced local detectives must work with one of their big-city counterparts to crack the case. I don’t really want to go into any detail about the twists and turns of the story, all I will say is that it is compelling, tense, and tinged with dark humour. For me, it is fighting with Parasite for the spot of Bong Joon Ho’s best film.

The Host (2006): A man’s daughter is taken by a monstrous creature which appears from a nearby river, and the film follows his attempt to rescue her against the backdrop of the monster’s rampage and the government’s attempts to subdue it. The monster effects look a little dated by now, but the film’s style, comic undertones, pacing and visual flair more than make up for it.

Mother (2009): A mentally-handicapped young man who lives with his elderly mother is arrested for the murder of a local teenage school-girl. The film follows the titular mother as she goes about trying to prove her son’s innocence. Again, I don’t want to say too much about what happens and spoil any of the twists and turns, but like Memories of Murder this story of a small-town killing is compelling and satisfying. For me, it probably sits in the tier just below Parasite and Memories of Murder in terms of rankings.

Snowpiercer (2013): Bong Joon Ho’s English-language debut, based on a French graphic novel, is set in a new ice age caused by climate catastrophe. In this new world, the survivors exist on the Snowpiercer, a train which is in constant motion, circling around the globe. On the train, the poorer passengers exist in squalor and labour at the tail of the locomotive, while the rich elite live in luxury further up the train. The film follows an uprising of the tail-enders, and their journey towards the front of the train. I don’t think it’s as good as any of the other films in the boxset, but it’s still enjoyable enough.

Parasite (2019): I’ve written about Parasite briefly before in my 2019 list, so I’ll just recap that here. In Parasite, four members of a poor family each become employees of a wealthy household by deceptive means, pretending to be unrelated and lying about their qualifications, in order to fraudulently receive substantial wages and pull themselves out of the underprivileged mire they find themselves in. Once well ingratiated with the wealthy family, events take an unexpected and dark turn. The ensuing carnage and surprises are best left untold, but suffice it to say, things get fairly wild. My favourite film released in 2019 (that I have seen thus far, anyway), Parasite is an interesting, energetic and nerve-jangling exploration of social class and structure. The black and white edition is worthwhile as well.

The Set Itself (Extras and Verdict)

In terms of the quality of the video and audio of each of the films, I have absolutely no complaints, it all looks and sounds great. Where it falls down for me though, is the relative lack of supplementary content and extras. First of all, there isn’t any booklet along with the set, just the art cards which, while nice to look at, aren’t anywhere near as interesting as a collection of essays and/or interviews would’ve been.

In terms of extras, there are some, but the distribution is a bit uneven. The Host has the most with more than ten, Snowpiercer is next with six, and Mother and Parasite have four each. That is being generous and including the trailer as an “extra” as well. The remaining three discs only have a trailer for each film by way of extras. While there is some nice content to be found among the extras that are included, it doesn’t really feel like a great deal of effort has gone in to making this set a must-have, getting the kind of treatment you might see in a Criterion release or Arrow boxset.

All in all, this boxset would still be worthwhile for you if these are films that you want to see, and you don’t already own some of them in their existing releases. I’d probably prefer it to be just a little bit cheaper, to be honest, but £45 or so is still not too bad for 7 discs. Not a “must-have”, but definitely convenient if you have interest in Bong Joon Ho/South Korean cinema and don’t own anything already.

Note: The synopsis on the link above only lists the extras from the Parasite disc, there are extras also on other discs as well, as discussed in my review.