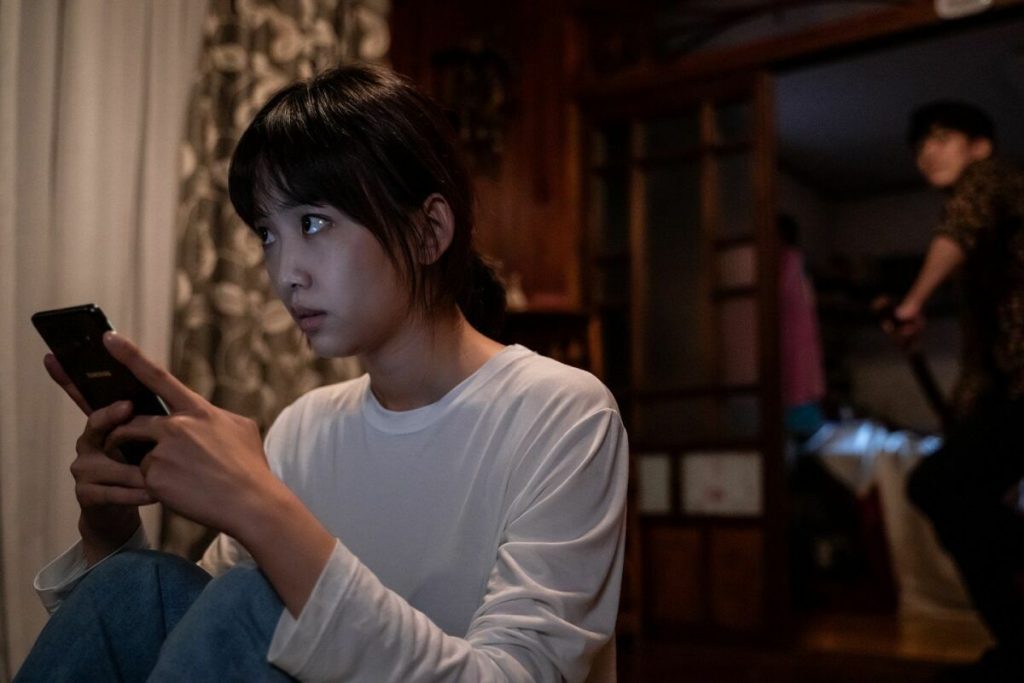 Being a follower of Eureka Entertainment’s Twitter account, Midnight is a film I’ve been hearing quite a lot about for the past year or so, from its initial limited release (which I sadly couldn’t get to any screenings of) all the way up to its Blu Ray release this week. It’s safe to say I was looking forward to finally seeing this, the premise seemed quite unique and had a lot of potential, so when the Blu Ray dropped through my letterbox, it made sense to bump it right to the top of my watchlist and watch it as soon as possible. The first thing I noticed though, and what I’d like to mention before talking about the film itself, is how nice the slipcover is. The last Eureka blu ray I bought that had a slip-cover was Made in Hong Kong, and this one feels much fancier than that. The back of the box calls it an “O Card Slipcase”, so I guess that must be something different from the usual! In any case (get it?), it seems to be very high quality, and the art-work on the cover is great too.

Midnight is the story of Kyung-mi (Ki-joo Jin), a hearing-impaired young woman living with her hearing-impaired mother who unwittingly stumbles into the midst of the abduction of young woman Choi Seo-jung (Kim Hye-hoon). For this transgression, Kyung-mi becomes the new target of local serial killer Do-Sik (Wi Ha-Jun; Squid Game). The rest of the film is a tense game of cat and mouse, as Kyung-mi attempts to escape Do-Sik and bring him to justice, with Seo-jung’s brother Jong-tak (Park Hoon) and Kyung-mi’s also hearing-impaired mother (Gil Hae-yeon) joining the chase to try and save their loved ones.

I think what I enjoyed most about Midnight is how well it deals with set-up and pay-off, starting with its characters. Kyung-mi’s general difficulty in making herself understood to strangers is made clear through an after-work function. Do-Sik’s chilling calmness and improvisational skills are emphasised immediately in the film’s opening scene, as we watch him abduct, murder, and escape police suspicion all within a few minutes. Environmental hazards and the necessity of being totally aware of your surroundings is highlighted through Kyung-mi’s mother’s near-collision with a motorbike. There are lots of small set-ups like this that come back in a more important way as the film progresses, and it’s all incredibly satisfying.

The film itself is absolutely dripping in tension, and full of twists and turns. It’s hard to tell just what’s going to happen, and it’s frustrating and chilling in equal measure to watch Do-Sik improvise his way out of trouble seemingly at-will. Not frustrating in a negative or unbelievable way, of course, but a frustratingly effective manipulation of police and general public, made all the more maddening through Kyung-mi and her mother’s inability to communicate the truths that would evaporate Do-Sik’s lies.

Overall, the film is a taut, absorbing, nail-biting thriller which mercifully avoids the pitfalls of serial killer film cliche. Oddly, this film made me think of CODA, another film focusing on deaf characters released in 2021. Both films have fairly simple plots (a young girl finds her talent and wants to chase her dreams in CODA, a serial killer cat and mouse tale in Midnight), but while CODA falls into cliche and offers nothing insightful or interesting, just the same film we’ve seen a million times before but this time featuring deaf supporting characters, Midnight actually utilises its deaf characters to full effect to put an interesting and unique spin on a simple story.

The Eureka release of Midnight also comes with a short collector’s booklet featuring an essay from film critic Alexandra Heller-Nicholas, as well as some nice stills from the film. The essay was an enjoyable and not too lengthy read, and highlighted something else I really enjoyed about the film: Kyung-mi’s hearing impairment doesn’t define her, she’s a strong, intelligent and capable woman who just happens to also be deaf. The booklet, along with the aforementioned high-quality slipcover and great cover art, make this a very handsome release.

In terms of on-disk extras, there is an audio commentary with film historian Kat Ellinger and a video essay on the history of Korean horror cinema by critic Travis Crawford (23 minutes). I was disappointed in the video essay as, although there seemed to be a good deal of interesting information in it, it was visually unappealing. It was literally just the first 20 minutes or so of Midnight silently playing in the background while Travis Crawford delivers his voiceover, with posters and the occasional still image of films he mentions being briefly superimposed on top of the Midnight footage every now and then. I think that one would benefit from either being edited more to include clips from films he’s discussing (where available), or just including it as a written essay in the booklet instead.

So overall, an incredibly worthwhile release of a great film, handsomely presented, but sadly lacking a little in terms of extras content. I hope that the Squid Game connection hooks in people who wouldn’t usually be interested in South Korean cinema so that releases like this reach these shores with increased regularity and popularity!

The film is available here: https://eurekavideo.co.uk/movie/midnight/