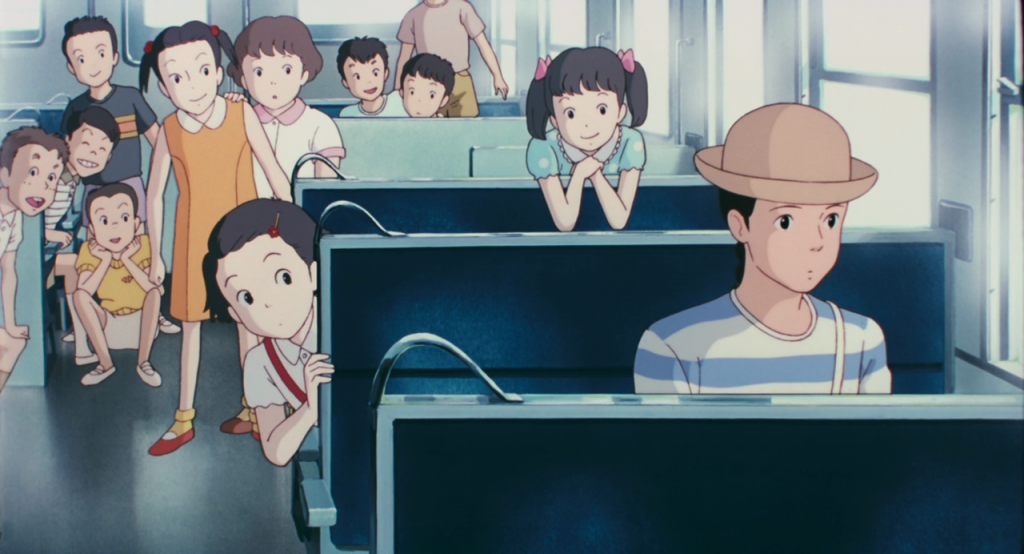 Taeko Okajima, a 27 year old single woman from Tokyo, is preparing to go on vacation to the countryside. In her childhood, she always dreamed of having relatives to visit in the countryside, a dream now realised through the marriage of an elder sister. Her trip takes her to the farm of her distant relatives, where she helps with the harvest of safflower and ingratiates herself into the rural community. The trip brings up old childhood memories, and the film moves between Taeko’s childhood and the present, exploring themes of love both young and adult, and the importance of remaining true to yourself in the face of societal and familial pressures.

The contrast of Taeko’s remembrances of childhood with her experiences in the present help to give a complete sense of her character. Why she behaves as she does, what is important to her, and why. The childhood scenes are rendered in a traditional anime style, while the adult world is animated in a much more realistic fashion. During the childhood flashbacks, it’s as if the characters are running around in watercolour backdrops, the edges faded, colours muted, details rubbed away, just as time rubs away at memory. By contrast, the adult scenes are much more full in terms of background, colour and detail, with particular attention paid to character’s facial movements and expressions. The understated juxtaposition between the more realistic animation of present-day Taeko’s scenes with the more traditional anime style of her memories as a 10 year old subtly gives each its own distinct feel and flavour, and heightens the wistfulness and nostalgia of the memory sequences.

This stylistic choice really marks the childhood scenes distinctly as memory, and gives us pause to consider “Why?”. Why these specific memories, and why now? The memories might be marked by their being a period of change, of childhood fantasy soured by reality, or dalliances with romance. These childhood experiences thematically align with Taeko’s adult present, allowing us intimate access to her patterns of thought, her motivations and desires. We experience not only Taeko as she is now, but are given a complete sense of how she came to be. The memories give life and depth to Taeko’s personality, imbues us with a sense of understanding in why she is struggling to live the life she wants.

It is a quite simple story, of love and work and dreams, and realised with beautiful depth and artistry. Maybe you’ll think back to your own childhood, of old dreams and where you find yourself now. Maybe your childhood self would be pleased, maybe you still have a way to go…

Taeko’s character is built carefully and exquisitely, so that by the time we reach the film’s end we root for her completely. The ending always gets me, as melodramatic and “Hollywood” as it may seem, it is absolutely well-earned. The Japanese translation of “The Rose” is such a great song choice, and it’s impossible not to find yourself smiling and willing Taeko on with the rest of them.